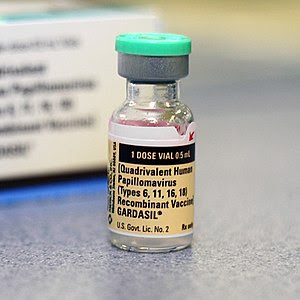 
Gardasil and Cervarix are similar drugs promoted as a cervical cancer vaccine.

The drugs vary in the types of human papillomavirus (HPV) they treat, which is the virus said to cause cervical cancer. Gardasil, manufactured by Merck, Inc.,  is promoted as the only cervical cancer vaccine that helps protect against four kinds of HPV (types 6, 11, 16 and 18), including two types that cause 70 percent of cervical cancer cases, and two more types that cuase 90 percent of genital warts cases.
Cervarix, manufactured by GlaxoSmithKline,  is not currently available in the United States, but was approved for use in the U.S. by the FDA on October 16, 2009, and is expected to enter the market here by late 2009. It is already approved for use in Australia, the Phillipines and the European Union. It is used in the UK for a national program of vaccination for teen and pre-teen girls to target two types of HPV (types 16 and 18) for the prevention of cervical cancer and pre-cancers.

Both Gardasil and Ceravix are marketed to be given to girls and young women as young as age 9, and up to age 26.

Since Gardasil’s introduction in 2006, the Vaccine Adverse Event Reporting System (VAERS) has received more than 15,000 reports of adverse side effects related to Gardasil. These reports include serious adverse
side effects including Guilliane Barre, lupus, seizures, paralysis, blood clots, brain inflammation and many others. There also have been 44 reported deaths as a result of Gardasil uses.

Cervarix has been linked to more than 2,000 cases of serious, adverse reactions since the UK government began administering it to schoolgirls last year. One of the worst cases involved 14-year-old Natalie Morton, who collapsed and died in school in England just one hour after receiving the vaccine.

Then, on October 25, 2009, Dr. Diane Harper, lead researcher in the development of two human papilloma virus (HPV) vaccines and director of the Gynecologic Cancer Prevention Research Group at the University of Missouri, told an audience of medical professionals that Gardasil is largely unnecessary, and that it has never been fully tested on females under the age of 15. This, despite strong marketing efforts to make the drug mandatory for girls, and product literature and advertising that state the product can be used by girls as young as age 9.

On Oct. 16, 2009, the same day GlaxoSmithKline got approval to market its Cervarix drug in the U.S. the FDA also granted approval to Merck to expand the use of Gardasil in the U.S. to treat boys and men ages 9-26 for the prevention of genital warts.

Ad in the United States, and is recommended for girls and women ages 9-26 by manufacturer Merck, Inc.

In February 2009, the National Vaccine Information Center, a private vaccine-safety group, conducted a comparative study of adverse events reported following a Menactra (meningococcal) vaccine versus the Gardasil vaccine.  Both vaccines are recommended for youngsters in the same age group, at 11-12 years old (Menactra for boys and girls, Gardasil for girls only). The study compares VAERS data reported for each vaccine.

Posted by Litigation news at 1:51 PM