I pulled this from my good friend Chris Hellum's blog, analabamalawyer

"Elliott Kaplan is a prominent Kansas City attorney. For years, he railed against judges, juries, and trial attorneys. He was well known as one of the founders of the modern tort reform movement in America. He was named "Legal Reform Champion" by the American Tort Reform Association.

In a cruel twist of fate, it appears he may have reaped what he sowed.

According to its website, The American Tort Reform Association was founded in 1986 by the American Council of Engineering Companies and shortly thereafter, the American Medical Association followed them. They have worked to enact tort reform legislation in 45 states. They have led grassroots efforts which have resulted (they claim) in 85% of Americans believing that frivolous lawsuits clog our courts.

WHAT HAPPENED TO LAWYER KAPLAN

To save his life, he underwent a Whipple resection, a highly invasive surgery that can cause more harm than good. It was only after the surgery that the diagnosis was determined to be wrong, that he only suffered from pancreatitis, and that the Whipple resection made the condition worse, leaving him debilitated and a broken man.

Believing that the doctor had committed malpractice, Kaplan sued the pathologist alleging negligence in the diagnosis. He assembled an army of attorneys to represent him. Unfortunately, the jury found against Kaplan and awarded him no damages. He has moved for a new trial. The motion is currently pending.

I certainly feel for Lawyer Kaplan. Unfortunately, he and the organization which he was a "Champion", foster the belief that all lawsuits are frivolous and that they compromise access to affordable health care, punish consumers by raising the cost of goods and services, chill innovation, and undermine the notion of personal responsibility.

I don't know if his lawsuit was meritorious or not. If it is, then I pray that justice will prevail. I do know that his organization, the American Tort Reform Association, has perpetuated the belief among most Americans that all lawsuits are frivolous. The beneficiaries of this belief are not injured or defrauded people, but the insurance companies and large corporations who fund these organizations."


Chris Hellums can be reached at Chrish@pdkhlaw.com
Posted by Litigation news at 9:19 AM

Approximately 35 million Americans use denture creams and several of the popular adhesives, such as Fixodent and Super PoliGrip, have been linked to serious and debilitating injuries caused by excess levels of zinc contained in the products that may enter the body.

Some users may have suffered from neuropathy or other injuries caused by zinc poisoning, which could cause symptoms like:

The makers of each product believe their products work as advertised.
Posted by Litigation news at 6:58 AM

Hazard: Some robes fail to meet federal flammability requirements and present a risk of serious burns to consumers if they are exposed to an open flame.

Incidents/Injuries: Blair has received three reports of the robes catching on fire, including one report of second-degree burns.

Description: The recall involves the Full Length Women’s Chenille Robe with the following item numbers: 3093111, 3093112, 3093113, 3093114, 3093115, and 3093116. The item number is identified on a label in the garment’s neckline. This is a one-piece garment made of plush sculpted chenille, a shaped stand collar, and horizontal chenille front and back yolks and cuffs. The robe has a full-button front with seven matching button closures, long sleeves with self cuffs, a straight bottom with self hem, and two sideseam pockets. The robe’s sewn in label states: “100% Cotton, RN 81700, Made in Pakistan”. Robes with other item numbers are not included in the recall.

Remedy: Consumers should stop wearing the garment immediately. Contact Blair LLC for information on returning the robe and to receive a refund or a $50 gift card for Blair merchandise.
Posted by Litigation news at 4:44 AM

News regarding an Alabama Supreme Court decision, and cases are before the Court on a certified question from the United States District Court for the Northern District of Alabama. The USDCT concluded that it was not clear under Alabama law whether claims alleging the breach of the implied warranties of merchantability and fitness for a
particular purpose are subject to the defense of the sealed-container doctrine.

Supreme Court held that they were not. Opinion here.
Posted by Litigation news at 5:19 AM

More about the recall here.
Posted by Litigation news at 5:25 AM 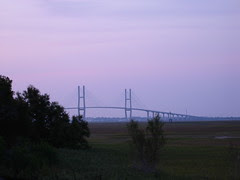 I'm working on a new blog for Southeast Georgia. I've been litigating in Brunswick, Glynn County, Woodbine, Folkson, Camden County and other cities there for nearly a half decade, and have opened an office there.

For a dose of segeorgia flavor, visit that blog.

Posted by Litigation news at 6:56 AM

News from A Friend's Firm: Lawsuit in MD

I count Rick Kuykendall as one of those lawyers whom I trust. He's with the Murphy Firm in Baltimore, and there is this news this week:

The Murphy Firm of Baltimore and Henry & Associates of Largo have announced the filing of a 12-count civil suit that charges Prince George's county officials and some of the County's correctional and law enforcement officers with responsibility for the 2008 death of 19-year-old Ronnie L. White, who, the suit states, was “assaulted and killed by the very same correctional officers who were supposed to be there to insure his safety.”

White died of a broken neck and asphyxiation 34 hours after he was received in custody by the Prince George's County Correctional Center. Following an autopsy, the Office of the Chief Medial Examiner for the State of Maryland ruled that White's death was a homicide.

The suit, filed on behalf of White's mother, Angela L. White, states that Ronnie White’s death was “the direct result” of excessive force and gross negligence by County officials, and that his constitutional and civil rights were violated. The suit is seeking $153,600,000 in compensatory and punitive damages.

We talked this morning, and he said his real issue front and center today is making sure his daughter Amalee Kuykendall gets to college on time. I worry about that day as well!

Posted by Litigation news at 5:20 AM