Why the MGM lawsuit is wrong on multiple levels


By now many people have read with varying degrees of dismay that MGM (and a number of related companies) has decided to file a lawsuit seeking to limit any liability it may have as a result of the deadly massacre carried out by a lunatic during the Route 91 concert.  Stephen Paddock, the gunman, stayed at Mandalay Bay Resort and Casino and shot at concert-goers from a 32nd-floor window of the resort on Oct 1. 2017, killing 58 people and injuring hundreds more. In November 2017, 100's sued MGM and Live Nation, claiming negligence.

What is the lawsuit about?  The 57 page complaint lays it out. After identifying the Plaintiffs, the lawyers for them allege:

There is no pending litigation between Plaintiffs and Defendants relating to the attack. (Para 273).

The Plaintiffs have attempted to utilize the SAFETY Act. According to the Complaint:

[Citing 6 U.S.C. §442(a)] the SAFETY Act expressly provides for original and exclusive federal jurisdiction over actions arising from or relating to acts of mass violence where technologies or services certified by the Secretary of Homeland Security were deployed. At the time of Paddock’s mass attack at the Route 91 concert, security services were provided by Contemporary Services Corporation as the Security Vendor for the Route 91 Harvest Festival. CSC’s security services were certified by the Secretary of Homeland Security under the SAFETY Act. (Para. 268).

The SAFETY Act created liability limitations for claims resulting from an act of terrorism where Qualified AntiTerrorismTechnologies (QATTs) have been deployed.

Lawyers not linked with the case have claimed that law was intended to shield manufacturers of security equipment—such as airplane doors and metal detectors—under the cloak of U.S. sovereign immunity and by potentially capping damages.

Was it terrorism?  No. "When asked if authorities believed the massacre to be an act of terrorism, Clark County Sheriff Joe Lombardo said, “No, not at this point ..."(2017)

In January of this year, the LVMPD issued a preliminary report.   The initial conclusion? This was not an act of terrorism. From the report:

Paddock acted alone. Thousands of hours of digital media were reviewed and after all the interviews conducted, no evidence exists to indicate Paddock conspired with or acted in collusion with anybody else. This includes video surveillance, recovered DNA19and analysis of cellular phones and computers belonging to Paddock.

* No suicide note or manifesto was found. Of all the evidence collected from rooms 32-135 and 32-134, there was no note or manifesto stating Paddock’s intentions. The only handwritten documentation found in either room was the small note indicating measurements and distances related to the use of rifles.

* There was no evidence of radicalization or ideology to support any theory that Paddock supported or followed any hate groups or any domestic or foreign terrorist organizations. Despite numerous interviews with Paddock’s family, acquaintances and gambling contacts, investigators could not link Paddock to any specific ideology.

The law enforcement agency assigned to this tragedy cannot come to the conclusion that the violence was terrorism. This report was issued nearly six months prior to the MGM filing.

What has the Department of Homeland Security said? Well, they haven't said it's terrorism:

For Immediate ReleaseOffice of the Press SecretaryContact: 202-282-8010
WASHINGTON – Acting Homeland Security Secretary Elaine Duke has been briefed on the horrific shooting in Las Vegas, Nevada last night. The Department is closely monitoring the situation and working with our federal, state and local partners in responding to and investigating this tragedy.
At this time, we have no information to indicate a specific credible threat involving other public venues in the country. However, increased security in and around public places and events may be experienced as officials take additional precautions.
Our thoughts and prayers are with all those affected by this incident as we work to support the Las Vegas community.
See: https://www.dhs.gov/news/2017/10/02/dhs-statement-las-vegas-shooting
The FBI also chimed in:
The FBI said the deadly mass shooting in Las Vegas had no connection with an international terrorist group. "We have determined, to this point, no connection with an international terrorist group," an FBI special agent stated.
See http://thehill.com/homenews/news/353426-fbi-las-vegas-shooting-has-no-connection-with-international-terrorist-group

The day before the lawsuit was filed, zero law enforcement on the local, state, or national levels had declared this heinous act one that was considered terrorism.

The day before this lawsuit was filed, what is known about the SAFETY Act is what any person - lawyer or not- could find on the web:

The purpose of the Act is to ensure that the threat of liability does not deter potential manufacturers or sellers of effective anti-terrorism technologies from developing and commercializing technologies that could save lives. Key to this act is  an “act of terrorism” is an act, determined by the Secretary of DHS. At the very least, in the absence of such a determination, reason and logic would suggest that some law enforcement agency would make that determination - not  a Judge.

Legal scholars have noted the limits of the SAFETY Act: If an incident is deemed by DHS to be an act of terrorism, an entity that has achieved this level an utilize the government contractor defense to all claims that may arise. The NFL received the distinction in December 2008, and its renewal runs through November 2018.Those benefits do not flow down to the teams or stadium owners.

Here, the legal reasoning is wrong. Was there some authentic effort to proceed in some other way? Was the only resort the filing of a lawsuit against victims, even if only seeking a declaration/limitation of rights? In the cases found on Pacer, such as Sheppard et al v. Mandalay Bay, LLC et al the Removal papers describe the SAFETY act as the basis for being before the USDCT. Would consolidation, and a stay have been the better course? Some won't ever know now. There are reports that some of the survivors are now dealing with another round of PTSD thanks to this.

Now, on to what is worse.

This is a huge business blunder in my humble opinion. By it's own admission, MGM states that there are no lawsuits pending, only a 'threat' of several. So what does it do? The Plaintiffs send out a summon to nearly 1,000 people. In some instances, there are estates established (undoubtedly). What will those people do? Ignore the lawsuit? Do they have enough money to retain counsel in Nevada? What happens if they do not answer? Is there a default? In theory, a victim who needed and received medical care incurred costs. That same victim may have lost time from work, or worse. Is this a second act that also victimizes a person who is truly innocent?

From a business perspective, MGM is getting skewered on Social Media: 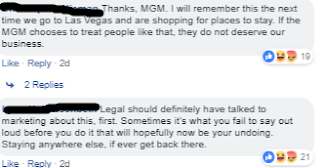 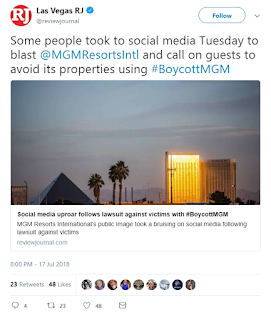 In the quest to limit liability, common sense and reason should rule the day. In my opinion, both went out the window with that filing when it came to the victims. MGM is (in my view) clearly hoping for the entry of defaults by the hundreds. So, in a way that is best called perverse, victims will "lose" as defendants. I predict a Motion for SJ will be filed where the first few lines will state: "More than 300 Defendants have failed or refused to Answer the Complaint served."

Will the DHS Secretary be deposed? Will a retired "law enforcement expert" be hired to complete an affidavit that says yes, this was terrorism? I'll bet one person a nickel that happens. This cannot be what the SAFEY act authors envisioned.


What do other say?

From the USA Today:

How any corporation could find the gall and lack of humanity to take such an action is beyond comprehension.The federal law was meant to protect companies, for example, that come up with new technologies to thwart terrorist attacks, but might be reluctant to market them for fear of liability if a terrorist attack occurred.

Nine months after the Las Vegas shooting, shooting survivor Lisa Fine's physical injuries have healed. Her emotional and psychological wounds have not. Fine is the co-founder of Route 91 Strong, a group for survivors of the concert shooting. Fine says MGM's latest legal maneuver makes her feel sick to her stomach. "It feels like bullets flying at my head right now," Fine said.
An attorney for several victims has been quoted: "I've never seen a more outrageous thing, where they sue the victims in an effort to find a judge they like,” he said. "It's just really sad that they would stoop to this level."

Posted by Litigation news at 12:53 PM