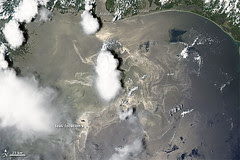 Image by cayobo via Flickr
Lots of questions about the $20B fund that will have $5B in it when claims begin to be analyzed later this summer: Attorney Kenneth Feinberg has been assigned the responsibilities of overseeing the $20 million fund that oil giant is likely to pay as compensation to the victims of the oil spill disaster off the gulf coast

What is an escrow fund?

The money is put into an escrow account to ensure that an amount  will handle oil spill claims. BP does not have access to the money once it has been released the US Government.

Where does the $20 billion go?


Is the $20 billion accessible now?

Not by any stretch. BP  must pay $5 billion per year over the course of four years at a minimum. The company will make initial payments into the escrow fund of $3 billion this summer and $2 billion in the fall, followed by $1.25 billion per quarter until the $20 billion figure is reached.

Does the Fund limit BP's liability?

It does not. If paid claims are more than the commitment, BP is on the hook


How does a claimant receive money from the fund?

No specifics yet. The claims process will be hands off for BP. Claims denials are reviewed by a three-judge panel. BP can only appeal claims exceeding $500,000.

Posted by Litigation news at 9:18 PM