FL Court: Commercial Fishermen Have Causes of Actions Based on Pollutants' Release 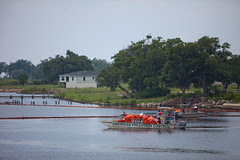 Image by kk+ via Flickr
A recent Florida Supreme Court decision is especially timely given the man made catastrophe in the Gulf. The Court answered two certified questions:

DOES FLORIDA RECOGNIZE A COMMON LAW THEORY UNDER WHICH COMMERCIAL FISHERMEN CAN RECOVER FOR ECONOMIC LOSSES PROXIMATELY CAUSED BY THE NEGLIGENT RELEASE OF POLLUTANTS DESPITE THE FACT THAT THE FISHERMEN DO NOT OWN ANY PROPERTY DAMAGED BY THE POLLUTION?

DOES THE PRIVATE CAUSE OF ACTION RECOGNIZED IN SECTION 376.313, FLORIDA STATUTES (2004), PERMIT COMMERCIAL FISHERMEN TO RECOVER DAMAGES FOR THEIR LOSS OF INCOME DESPITE THE FACT THAT THE FISHERMEN DO NOT OWN ANY PROPERTY DAMAGED BY THE POLLUTION?

As to the first question, here's what the Court held:

"The Legislature has enacted a far-reaching statutory scheme aimed at remedying, preventing, and removing the discharge of pollutants from Florida‟s waters and lands. To effectuate these purposes, the Legislature has provided for private causes of action to any person who can demonstrate damages as defined under the statute. There is nothing in these statutory provisions that would prevent commercial fishermen from bringing an action pursuant to chapter 376."

The Court wrote as to the second question:

'We have plaintiffs who have brought traditional negligence and strict liability claims against a defendant who has polluted Tampa Bay and allegedly caused them injury. Thus, the economic loss rule does not prevent the plaintiffs from bringing this cause.'

The Court went on:

In the present case, the duty owed by Mosaic arose out of the nature of Mosaic‟s business and the special interest of the commercial fisherman in the use of the public waters. First, Mosaic‟s activities created an appreciable zone of risk within which Mosaic was obligated to protect those who were exposed to harm.

Mosaic's business involved the storage of pollutants and hazardous contaminants. It was forseeable that, were these materials released into the public waters, they would cause damage to marine and plant life as well as to human activity.

Here, the discharge of the pollutants constituted a tortious invasion that interfered with the special interest of the commercial fishermen to use those public waters to earn their livelihood. We find this breach of duty has given rise to a cause of action sounding in negligence. We note, however, that in order to be entitled to compensation for any loss of profits, the commercial fishermen must prove all of the elements of their causes of action, including damages.

Posted by Litigation news at 1:15 PM