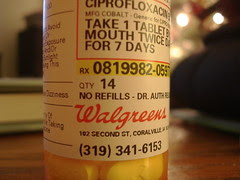 The FDA has issued an alert to health care professionals against the use of certain IV bags of metronidazole, ondansetron and ciprofloxacin because of potential contamination.

The alert came after floating matter was observed in bags manufactured by Claris Lifesciences Limited. Claris is initiating a recall of all lots of these products, as well as all lots of ciprofloxacin. The products were all manufactured on the same manufacturing line. The FDA is investigating the situation and will notify the public when new information becomes available.

Potentially affected bags are sold under the Claris, Sagent Pharmaceuticals, Pfizer and West-Ward Pharmaceuticals labels, according to an FDA press release.

The affected products include:

Health care professionals should not use — and should immediately remove from their pharmacy — inventories from any of these products.

FDA officials said that patients who have received these products should be observed for signs and symptoms of illness and treated appropriately.

Posted by Litigation news at 6:17 PM