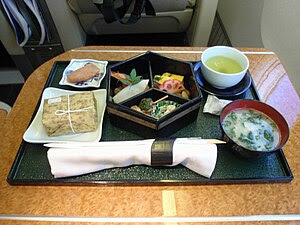 Image via Wikipedia
At first I laughed when I read the headline, thinking- airline food not healthy? What's next, FDA declares smoking is bad for you? Then I read more ...

FDA inspectors have found that a large number of catering facilities that supply airlines with food are suspected of violating sanitation regulations. This follows kitchen inspections last year and earlier thius year.
Inspections were carried out at three of the largest airline catering facilities in the world: Gate Gourmet, LSG Sky Chefs and Flying Food Group.

Between them, the three caterers have over 90 kitchens and they prepare at least 100 million airline meals every year to the US trade, as well as foreigh airlines serving from US airports. All the biggest and best known US airlines are included, such as United, US Airways, Delat, American and Continental.
Among the problems reported that could put passengers at risk was food stored at incorrect temperatures, equipment that was not properly cleaned and workers practicing poor unhygiene methods.

If you can stomach more bad news on this, go to the source.

Posted by Litigation news at 5:00 AM