I watched coverage of the early risers walking (stumbling?) around New Orleans this morning. I still can't figure out why Mayor Ray Nagin was wearing a General's army uniform, perhaps he will explain it later. Props to Anderson Cooper who is in town there now, and has been for a few days.

I read that Monica Bay at The Common Scold was there. She concisely wrote this on 2.27:

"This is the most complex city I've ever experienced. It reminds me so very much of Rio, and in some ways, of 1963 Berlin. I would never dream of pretending that as a California-bred middle class white baby boomer I could even begin to completely understand the dynamics that shape it. But I do know that it is a rescilient, spirited city, a vibrant city; so passionate, and that it will survive."

-- Well said. You can read more by going to her blog.

Ernie the Attorney and I talked for a few on Saturday night. If you have not read his blog, spend some time there today or this week. It's here. I'm a regular reader, and if you love New Orleans like I do, a must read to catch up on the "goings on goin on" there (as they say in Alabama). He wrote today:

So, like birds that are impelled by unseen forces, Mardi Gras impels us to follow our own primitive migratory patterns. But we, of course, are more advanced than migratory animals in that we carry plastic cups filled with bloody mary mix. 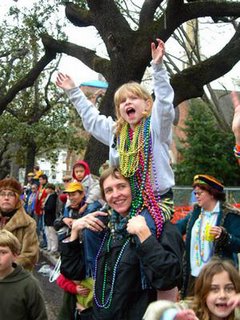 For those that think Mardi Gras is all Bourbon Street and beads and 'flashing' you are wrong. It's family, some decadence, and fun for the kids. Pics like the one you see above do capture the essence of Mardi Gras in my humble opinion.


A few signs and floats skewered everyone ... no one was spared. One sign repeated often said" Fix Everything My Ass." 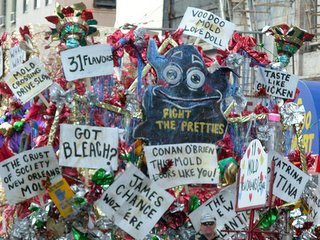 Happy Mardi Gras to all, and for those in New Orleans, hoist a bloody mary for me today.
Posted by Litigation news at 6:10 AM