In May 1, 2009 14 different different Hydroxycut products were taken off the market. Across the USA, there were news reports of  that the FDA had received 23 reports of liver problems, including a death allegedly from one of the products.  I've been involved in the Hydroxycut litigation as a member of the Plaintiffs Steering Committee in San Diego for more than three years.

In the aftermath of that product recall, public health researcher Ano Lobb, who studied Hydroxycut and other dietary supplements for Consumer Reports, was quoted as saying that the one of the problems may have been an ingredient called hydroxycitric acid. This ingredient is derived from a tropical fruit and has been linked to liver problems in at least one medical journal study. Lobb said it may be that other supplements containing the same ingredient remain on the market.

"You really have to be careful about dietary supplements, especially weight-loss pills," said Lobb. "People believe that the FDA has verified that these products are at least safe and effective, and that's really not the case. When you see fantastic claims - that's generally what they are."


For OxyElite Pro, could the issues that so far have been confined to Hawaii relate to the product's reformulation? For Hydroxycut, health officials said they were unable to determine which Hydroxycut ingredients were potentially toxic, partially because the formulation had changed several times.

From the time it reached the shelves across America until mid-2013, Oxy contained DMAA. According to the FDA DMAA, also known as 1,3-dimethylamylamine, methylhexanamine or geranium extract, is an ingredient "found illegally in some dietary supplements and often touted as a natural stimulant. DMAA, especially in combination with other ingredients such as caffeine, can be a health risk to consumers. Ingestion of DMAA can elevate blood pressure and lead to cardiovascular problems ranging from shortness of breath and tightening in the chest to heart attack. http://www.fda.gov/food/dietarysupplements/qadietarysupplements/ucm346576.htm

After the Department of Defense removed the shelves, and after the FDA actually seized Oxy from several distribution centers, USP reformulated Oxy. The reasons for this product ingredient change may never be made known to consumers, but the simple fact remains - DMAA was removed and a "new" Oxy went on the market.


Here's the new label for OxyElite:

On the bottles, here is what some consumers may have seen:

What's different from Oxy with DMAA? 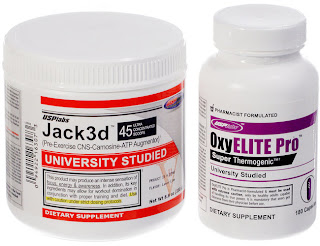 What does a consumer do? The old version of Oxy told potential buyers that the product was "University Studied" while the new formulation says that Oxy is "Scientifically Reviewed." A change, why? Has it been  been tested by a panel? Is there a peer-reviewed study for the new ingredients?

What's in this stuff? Bauhinia purpurea: A shrub that is commonly grown in Asia and employed extensively in Ayurvedic medicine. Bauhinia purpurea has been used traditionally to treat ailments such as sores, wounds and diarrhea. The chloroform extract of Bauhinia purpurea contains bioactive compounds with potential peripheral and central antinociceptive and anti-inflammatory activities. Animal studies suggest that Bauhinia helps maintain thyroid hormone levels. However, no similar clinical studies involving Bauhinia have been carried out. Bauhinia purpurea has not been approved for use by the Food and Drug Administration according to the FDA site and our research.

Cirsium oligophyllum: Use of this plant in the OxyElite Pro formulation may be based on an animal study (Int J Biol Sci 2009;5(4):311-318) which suggested that the extract could reduce bodyweight and fat mass, and appeared to specifically target subcutaneous fat mass rather than visceral fat mass.

Aegeline as well as Yohimbe are also in the new Oxy. Yohimbe's warnings include this: People with kidney or liver disease, stomach ulcers, heart disease, high blood pressure, low blood pressure, post-traumatic stress disorder, and panic disorder should not take yohimbe. This ingredient is only approved by the FDA to treat impotence.

In Hydroxycut, studies gave clues to what ingredient may be a culprit. From the Shim study:

One of the components of Hydroxycut®, Garcinia, has been associated with both hepatocellular and cholestatic pattern of injury and our biopsy was suggestive of cholangitis likely secondary to infectious or drug mediated injury. Extensive evaluation for infectious disease by an infectious disease specialist failed to diagnose any infection and fevers can be associated with drug induced hepatotoxicity and can last weeks. The authors initially placed the patient on broad spectrum antibiotics while we waited for diagnostic studies to return. He also had severe leukocytosis with a left shift to suggest a bacterial etiology but did not have any significant improvement in jaundice with antibiotics and later gradually improved without them. While causation is difficult to prove in any drug induced injury, the temporal relationship after Hydroxycut® exposure and gradual improvement after withdrawing the involved medication plus absence of any other etiologies despite comprehensive testing would point to Hydroxycut® being the most likely possible cause for hepatotoxicity. Earlier reports from Dara et al with case series of 2 patients have shown a similar temporal relationship, also present histological data for possible association with drug toxicity.


The challenge will be getting the company to disclose what amounts of each ingredient were in this product.

Posted by Litigation news at 6:32 PM