My office is investigating what to me are some of the most disturbing claims I have run across as an attorney. Patients have had implanted in them without their knowledge infected or contaminated bone and tissue parts while undergoing surgery for a back injury, a dental injury, or a fusion. Good hardworking people are now suddenly getting sick. Some have been diagnosed as having Hepatitis B or C, or worse. I wanted to jot down in a longer form what is happening to these folks to alert counsel across the country.


Bone and Tissue for Sale- How this scandal began

The practice of illegal trafficking in human organs, body parts, and tissue has made the news lately, and people have been indicted over the practice. Paitents who had bone or tissue implants placed in them without their knowledge are now getting sick and developing diseases like Hepatitis B and worse.

While the scandal of stealing bones from cadavers being falsely certified as clean continues to erupt in the headlines and the courtrooms, where did this mess all start? I can trace it back to UCLA’s Director of the Willed Body Program, Henry Reid. Reid was arrested and a criminal investigation launched several years ago.

The UCLA Medical Center investigation started in 1998. In March of 2004 Ernest Nelson was arrested - he claimed to have paid Director Reid hundreds of thousands of dollars for permission to enter the UCLA body freezer and and harvest body parts from hundreds of cadavers. You can read more here
about the arrest. The Los Angeles Times reported in 2004 that it was shown invoices on a UCLA letterhead indicating 496 cadavers were sold for a total of $704,600 between 1998 and 2003. One client was pharmaceutical giant Johnson & Johnson. Go here for the article.

Companies in the medical industry pay for a wide range of body parts including skin, scalps, teeth, skulls and bones, which are then used for among other things surgery. Heart valves can fetch $5,000 to $7,000 each. Skin, used to dress the wounds of burn victims, can go for $1,000 a square foot.If a single body could provide all its organs, the cadaver would be worth $150,000.

In 2004, Johnson & Johnson was named in court documents as having contracted with Nelson for human tissue. Later, a California law firm filed a class action.

The quest to have a class certified in that state failed. The California Court of Appeal issued a decision that may materially affect the ability to certify the matter. In Bennett v. The Regents of the University of California, 133 Cal.App.4th 347 (2005), the Court of Appeals, in dicta, implied that cases involving the mishandling of human remains do not generally lend themselves to class certification.

One of the risks associated with the illegal harvesting or snatching of body parts is that the ones who do it avoid screening and testing procedures set up and maintained to ensure recipients will not receive diseased or contaminated tissue, bone, or organs. With the possibility that many patients could receive tissue or bone from a single infected cadaver, the potential for a medical catastrophe cannot be minimized.

The FDA has issued reports on the harvesting, and in December of 2005 wrote on its website:

The Food and Drug Administration (FDA) is notifying the public of its investigation of human tissue recovered by Biomedical Tissue Services, Ltd (BTS) of Fort Lee, NJ and sent to tissue processors. Some of this tissue (e.g., human bone, skin, tendons) may have been implanted into patients from early 2004 to September 2005. The tissue was recovered by BTS from human donors who may not have met FDA donor eligibility requirements and who may not have been properly screened for certain infectious diseases.

Of special interest to periodontists are LifeCell Corporation, which produces Alloderm for BioHorizons, Inc., and Totugen Medical Inc, which produces Puros for Zimmer Dental. No adverse reactions related to these tissues have been reported at this time and the FDA and the Centers for Disease Control (CDC) believe the risk of infection from these tissues is low. It is important to determine whether the allograft material is from the recalled lots. Dentists and physicians who have obtained tissue affected by the recall should have been notified by now

You can find that information by going here. This news was preceeded by an October 2005 alert titled: FDA Provides Information on Investigation into Human Tissue for Transplantation, which can be found here.

In November, Medtronic informed the FDA that it had tracked 13,000 contaminated samples, and had 8,000 implanted.

In Brooklyn New York, more than one thousand bodies are part of the District Attorney’s investigations into the theft and sale of bones and other body parts removed from fresh corpses at several funeral homes, without permission. These were then sold to BioMedical Tissue Services, a Fort Lee, N.J., tissue recovery company run by Michael Mastromarino. There have been indictments issued, and they were handed down in February of this year. Go here for more information. The prosecutor has been quoted as saying that the case was "like something out of a cheap horror movie." Bones were replaced with everything from broomsticks and pipes to plumbing supplies. An AP photo can be found below showing just that: 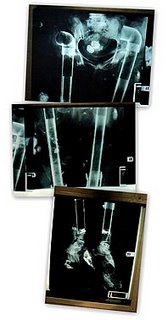 BTS is not alone. Lifecell Inc. has issued a recall of certain products made from body parts acquired from BioMedical Tissue Services. They are AlloDerm, used for plastic surgery, burn and periodontal procedures; Repliform used for gynecological and urological surgical procedures; and GraftJacket, used for orthopedic applications and lower extremity wounds.

In addition, many medical facilities and hospitals have directly written to patients to notify them of the possibility that they may have contracted any one or more of a number of serious and even life-threatening diseases from the bone or tissue grafts they received.

For example, The North Shore-Long Island Jewish Health System has mailed letters to former patients alerting them that they may have been exposed to potentially contaminated body parts. The letters state the hospital had indirectly received human bone, skin and tendons from BioMedical Tissue Services, which may not have properly screened the items for infectious diseases.

Health officials are concerned that tens of thousands of people across the country, and possibly more on Long Island, may have been exposed by untested parts from BTS

BioMedical is already being sued by many who claim a relative’s body parts were stolen from the grave and sold to the New Jersey company. Hundreds are already being tested for various diseases. BTS supplied bone, skin and tendons to various processors, who in turn provided them to distributors.

From the news developing, many of the body parts used on Long Island were purchased from BioMedical by a Florida tissue bank responsible for testing and sterilizing every body part it buys. Regeneration Technologies, based in Gainesville has or will be inmplicated.


Based upon the revelations so far, the scandal involving body parts, tissue, and bones promises to be major news for the next eighteen months or more.

Sources include:
nypress.comas well as articles on newsinferno and the daily news, and the FDA or at www.bonescandal.com
Posted by Litigation news at 11:49 AM